We often optimize by looking for a nice middle partway along a spectrum:

This idea goes back at least to Aristotle, who claimed that virtues (like courage) are means between two opposite extreme vices (like cowardice and foolhardiness).

So when I read Nassim Taleb’s The Black Swan, a book about how to prepare for the unexpectable, I was surprised to find that regarding the choice between high-risk high-growth investing and the low-risk low-growth options, he recommends not a middle ground, but a mixture: having some very dependable savings and some investments that are risky but full of potential. That way, you guard against catastrophe but stay open to good opportunities.

This got me wondering: When else is a mixture better than a middle? Another example would be a painting: a mixture of colors is much nicer than a canvas covered in a single average:

If I can spot the conditions that make a mixture better than a middle, maybe I can optimize in ways I’d never thought of before. 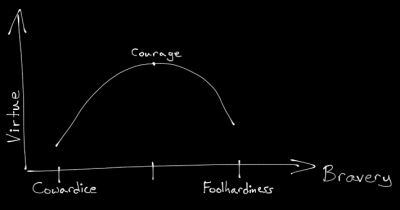 But just because the extremes are desirable doesn’t mean a mixture of them will be. I like food either hot from the stove or cold from the fridge, but lose my desire to eat leftovers when I unevenly microwave them, leaving tongue-burning hot zones beside pockets of still-cold areas.

Or even worse, I like milk and I like orange juice, but mixing them produces a revolting curdled mess. (Thanks for that lesson, summer camp.) But orange cake with creamy icing is lovely, so sometimes it’s the way you mix two things that makes the difference.

I think the answer resides in whether the extremes are alternatives or complements. Hot and cold are alternatives; you cannot heat and cool the same thing at the same time to enjoy the benefits of both. But opposite colors are complements: opposite colors can be sometimes be enjoyed even more side-by-side than alone. I caught on to this distinction a couple of weeks ago when my father-in-law mentioned growing morning glories and clematis on an arbor at their community garden. “Clematis takes longer to grow but is hardier, so it should be a good alternative—I mean complement—to the morning glories.” Aha! A mixture can be better than a middle or extreme when you enjoy the extremes for qualities that aren’t, in principle, mutually exclusive. Then you just have to find a way to combine them without destroying those qualities you like. 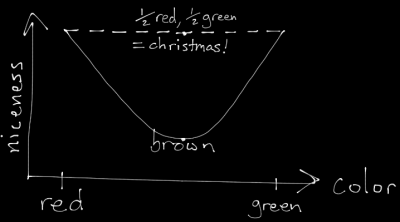 This explains Taleb’s investing advice: the opposite approaches of high-risk/high-reward and low-risk/low-reward have complementary virtues, so a mixture makes more sense than a single medium.

Since I started working on this post, I’ve been thinking about what other areas of my life might benefit from mixtures as opposed to middles. For example, I like how personal tutoring is, and I love how many people an internet video can reach. I’ve often told myself that I’m aiming for a reasonable middle ground by teaching classes of 20 to 30 students, where I can interact with each one in some small way. But maybe it would be better if I instead worked more as a tutor and made more videos, to get more depth and breadth of interaction from a mixture of approaches than any single one would provide. 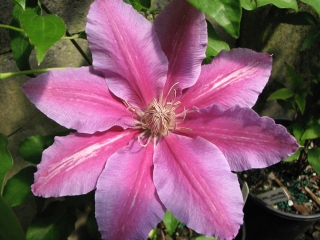 4 thoughts on “When is a mixture better than a middle?”