I want my groceries to be as high-quality as possible, but I also want them to be as cheap as possible. Since you usually can’t optimize with respect to two different metrics, you have to pick some kind of compromise: I tend to go for “as cheap as possible given a certain minimum quality,” and this usually means buying in bulk. (You could pick a different compromise—I heard a story of someone who resolved never to buy a bottle of wine costing more than $10, which I think is clever for other reasons.) But sometimes I break my rule, and don’t go for the bigger, cheaper version, and you might be surprised why. 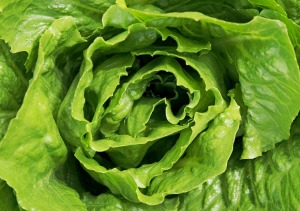 When I was in grad school, I wanted to start eating healthier. No, that didn’t mean eating more of the vegetables I already liked, that meant… salad! Because healthy people eat salad. So I shopped around at the nearest Wegman’s and found that the cheapest way to buy romaine was to get three whole unwashed romaine heads in one bag. So that’s what I bought. And that’s what stayed in my fridge until it went bad and I replaced it. This did not work as an eat-more-salad strategy.

The problem was that at any given moment, it was more work to prepare the lettuce (breaking it up, washing it, drying it, tearing it into bits) than I was willing to spend on a food I didn’t even like. The cost-versus-quality tradeoff doesn’t take into account a third and equally important dimension, difficulty of use: 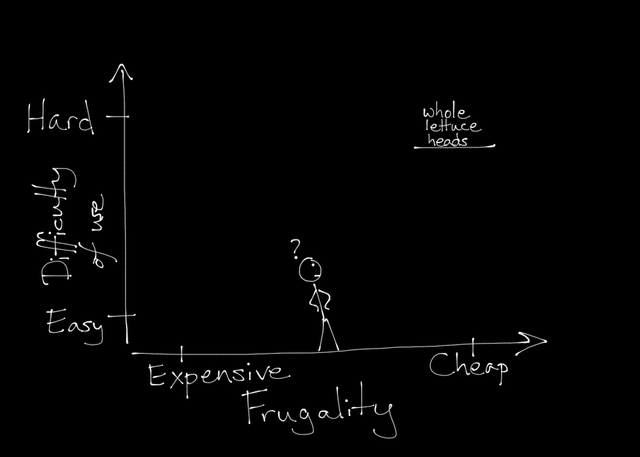 What I wish I had done, if I really wanted to become a salad-eater, was find the easiest possible way of eating salad—say, getting bags of pre-washed and cut lettuce, or just ready-made with toppings and everything, depending on how expensive I was willing to go—and do that until eating salad became normal for me. Then I could gradually move up the frugality scale, letting each additional step of salad preparation become an ordinary job, until I was willing to put in the work of making it from whole lettuce heads (or even growing it myself!). 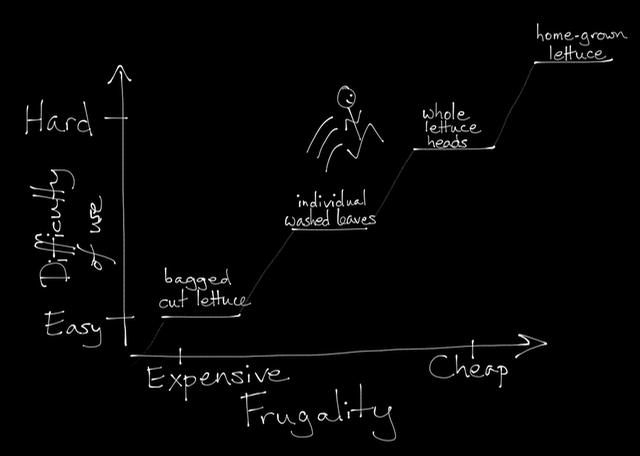 In the language of keystone habits and token actions, buying the whole heads of lettuce was a token action meant to affirm my identity — “I am healthy and thrifty because thrifty healthy people buy whole heads of lettuce” — whereas getting the more expensive but easier to use option would have been a keystone habit I could build on — “I’m not yet a salad eater but this is something I can commit to which will help me become one.”

Note that it sounds more expensive to go this route: even basic pre-made salads can be pretty pricey. But consider these two points in favor of making the extra expense:

Since I’ve had this realization, that it can be better and cheaper in the long run to go with more expensive options that require less commitment, I’ve applied it to other areas with great success. Instead of going straight for the 48-pack of store brand toilet paper, I’ll get a small package first just to make sure it’s something I can live with. And after trying and loving Minneapolis’s Nice Ride bikeshare program, Clara and I are using the pay-for-a-month-at-a-time option to make sure it’s something we’ll use for enough of the year to justify a longer-term membership.

3 thoughts on “Why I don’t always buy in bulk”