I got a traffic ticket for jaywalking once. (I didn’t realize it was actually illegal to cross on a don’t walk, even if there were no cars coming… hence my careful reading of that section in the Minnesota driver’s handbook when we moved here.) It was not a big deal—the cop takes your information, you pay a fine, life goes on and you’re a little wiser—but I remember obsessing about it for days: What if I’d gone another way? What if it’d been a different day? What if I’d just waited for the walk sign like I was supposed to? I felt absurdly as though if I could just figure out the right scenario, I could make it not have happened. I know this is not how it works, but maybe you’ve had this feeling too and understand.

That’s the kind of regret I want to talk about today, as opposed to ordinary sadness over an outcome (I only regret that it rained on our wedding day), or a simple wish that things had turned out differently (I regret to inform you that there were too many qualified applicants for us to accept them all). I’m thinking about the kind of regret that really makes you yearn to go back and change something. Like this kid, who is regretting his choice to play baseball inside and has broken an expensive vase (so expensive it’s pronounced “vahz”). Why oh why, he thinks, didn’t I play outside instead? 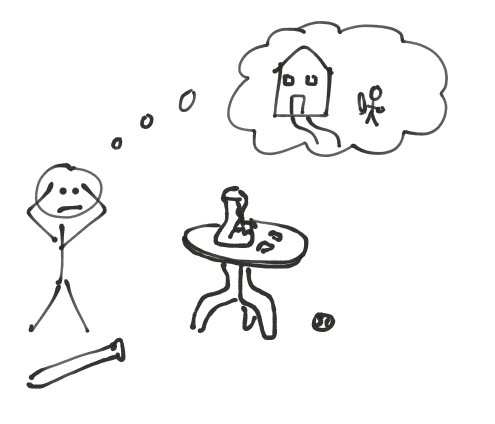 This dwelling on what might have been is not useful. More useful would be to apologize, clean up the broken pieces, try to do something to make up for the damage (like pay back the cost over time or look into vase repair services), and resolve never again to play baseball in the house. So why do we experience regret, if it’s not useful? Because hypothetical regret is useful.

If you’re deciding whether to do something, you imagine the consequences, and sometimes a consequence is wishing you’d have done something else. That sense of “I want a different reality!” is your cue to make a different choice.

It’s reminiscent of depth-first search for traversing the nodes and edges in a graph: keep moving until you reach an undesired outcome (traditionally a dead end or a node you’ve already visited) at which point you back up until you can make a different choice.

Now imagine if we didn’t experience regret: if when considering a bad outcome you don’t anticipate a “stop! rewind!” feeling, you might instead carry on imagining consequences forever: “If I play inside and break the vase my parents will be mad and I’ll have to pay for it out of my allowance and then I won’t be able to go out with my friends next month and they’ll turn into a clique and start to exclude me and that’ll make it much harder to find study partners for my exams and get into a good school and…” The threat of future regret helps you make better choices now, and the regret you’ve experienced in the past is just a way of honing this sense of how to recognize good choices for the future. In that sense, regret is pretty useful.

Of course, it’s not a perfect system. I suspect it’s easier to imagine regretting doing something, but that in the end what you regret more are things you didn’t do. And I’d rather make choices based on real consequences than on protective emotions like fear or regret. Not to mention, when you’re in one of those moments of deep regret, obsessing over things you can’t change really isn’t helpful. But if at the same time you’re beating yourself up for not just learning from it and moving on, take heart: this is what it feels like to learn from your mistakes.