I have the perfect cure for hiccups: chug five or six swallows of water while plugging your ears. (So in addition to the water, you need either someone to hold your ears for you, or a straw to drink through while you hold your own ears.) This technique has never failed me or Clara, and we’ve used it on dozens of occasions. I’m so happy to finally have a 100%-effective hiccup solution, I tell people about it whenever I can, but they never seem as convinced as I feel like they should be. Did I not just say that it works flawlessly? That I’ve used it countless times? People believe that that’s my experience, but are reluctant to share my life-changing conclusions.

Why is that? Why is our own experience more convincing to us than to other people?

First let’s briefly explore how sharing information seems like it should work. Imagine that you try some approach to life success—you took some career advice, or you tried out a particular diet, or you started a new exercise regimen—and it works out well for you. I’m going to represent that happy state with some confetti:

Wondering whether this strategy works for everyone, you can reason, rationally, that because it worked for you it probably works for a lot of people. (See also my post “Your Advertisement Here!“) But maybe you’re just lucky; let’s imagine that that’s the case and that for most people it doesn’t work:

If each of you tries to guess how often that strategy works, with only your own experience to go on, you’ll get dramatically different answers:

Fortunately, we can talk to each other, sharing information and updating our beliefs. When you and an unsuccessful person meet, you both adjust your guesses to the best fit for the data you have together.

And with each additional person you meet, sharing your experiences with each other, your probabilities adjust closer and closer to the truth. 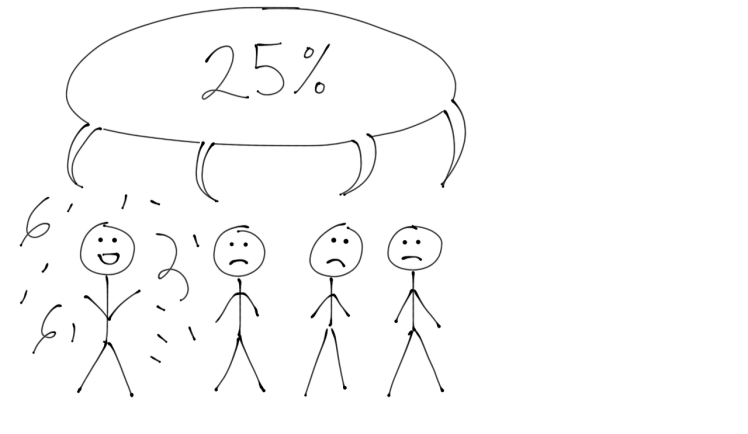 It’s a pretty good system: by pooling our experiences, everyone ends up with accurate beliefs.

So why isn’t this how it works with real claims to the secret of success? Why do we roll our eyes with every new diet or get-rich-quick scheme that comes around? I think I understand why I am not convinced, even if I don’t doubt their proponents’ own convictions:

First, I’m probably hearing about their success via an internet testimonial, or a TED talk, or a public lecture, and while I can then update my beliefs given their experience, it doesn’t go both ways. 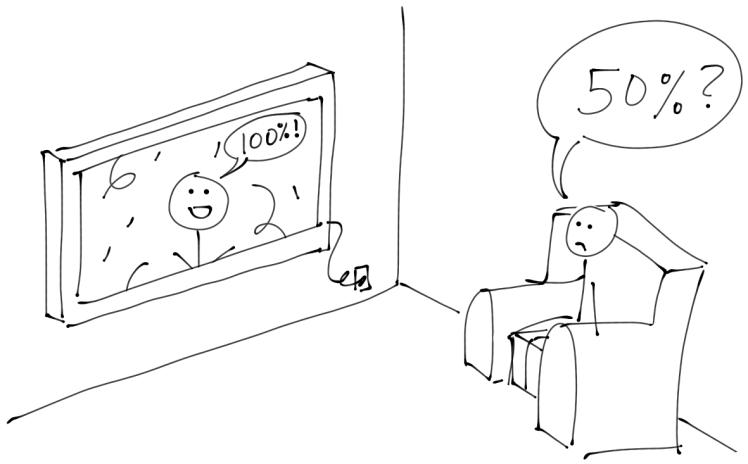 So if I’m the hundredth person hearing their story, when they haven’t also been learning from their listeners, that successful person probably has an inflated view of their strategy’s reliability, so I don’t feel like it’s right to update my beliefs as much as I would if I could fully trust theirs. (For a humorous take on this idea—and with better stick figures!—see the recent XKCD comic on Survivorship Bias.)

But there’s also a second effect that makes me skeptical. I’m only hearing their success story because it is one: people are more apt to pass along “The secret to success!” than “A thing that sounded like it could have been the secret to success but turned out not to be!” So if I just naively updated my thinking based on broadcast beliefs, I would be putting a lot more credence in the success stories than I should be.

So here’s my two-part rule of thumb on when to be skeptical of someone’s secret to success, even when I don’t doubt that they are rationally convinced by their own experience. If the answer to either question is No, then their advice is probably less reliable than it seems.

So maybe if I really want to convince people that my hiccup cure works, I should add, “Let me know if you try it and it doesn’t work, so I can stop telling everyone it’s a perfect cure.” Not only would that be valuable information to me, the request would also signal that so far, no one has come forward with a counterexample. (Consider yourselves so prompted. I really would love to know if my cure isn’t as reliable as my own experience tells me it is.)

Hmm… perhaps this means I should lay off telling as many people as I can about my hiccup cure, waiting instead for them to ask me unprompted what I’ve found that works or doesn’t. Oh well, too late? Enjoy!