I used to imagine that when two people are trying to act in their own self-interest, the result is a kind of tug-of-war: 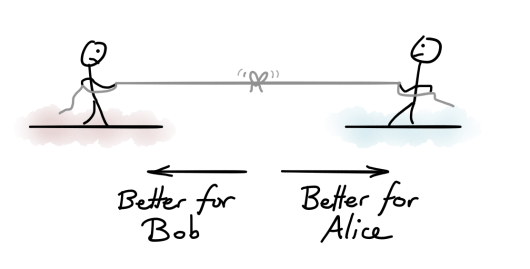 In other words, there’s a loser and there’s a winner, and the winner is the one who pulls harder to get their own way. These days, however, I find it helpful to remember that win/win scenarios exist too, and that there are also lose/lose outcomes where everyone is worse off. Now I picture the possibilities as wedges of a pie: if the starting situation is at the crosshairs in the center, each outcome falls into one of four categories, making Alice and Bob each either better or worse off than they were before. 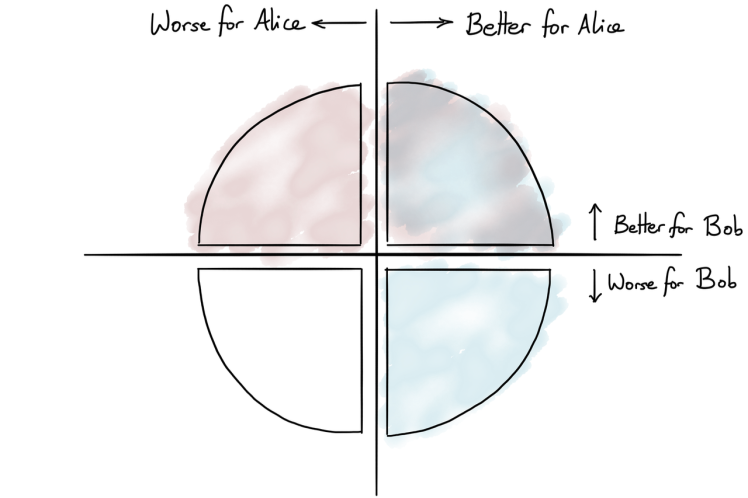 If Alice is acting in her own self-interest, she’ll try to tug the situation into one of the blue-shaded areas:

Similarly, a self-interested Bob will try to pull in the direction of one of the red-shaded areas.

Together, they’ll have a combined effect that creates one net outcome. If both of their actions benefit not just themselves but also each other, they’ll be pulling in similar directions and create a large effect that’s good for both of them. 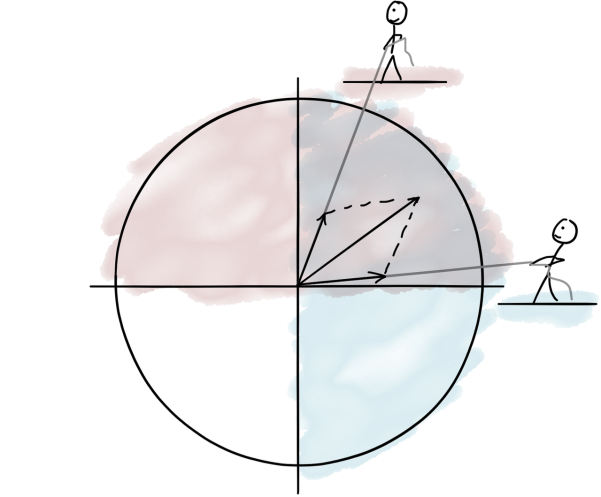 But the surprising thing is that even if both of them are acting in their own self-interest at the expense of the other, they can both still end up better off. For example, Clara’s sinuses act up when she dusts, and bathroom cleaning products hurt my hands, so selfishly giving those chores to each other is a small net positive for both of us.

That kind of setup can easily flip around, though, to where the combined effect of our self-interest makes us both worse off. Classically, this scenario is called The Prisoner’s Dilemma or (when involving a large number of people) The Tragedy of the Commons. I gave another example a few months ago, in which each homeowner on a busy road paves a parking space into their yard to increase their property’s value. The result, however, is that each new paving uglifies the neighborhood enough that in the end, everyone’s property values have gone down instead. 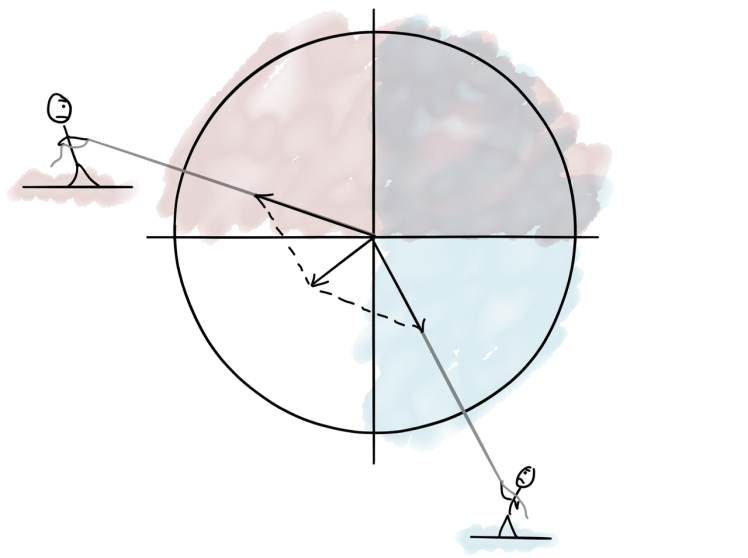 So how can you prevent this outcome? How can you keep the combined effect of self-interest from being against everyone’s? The hypothetical Alice and Bob could agree to only take actions that are good for both of them, but then they’d miss out on deals like the one I have with Clara, where we each exploit the other to the betterment of us all. A more general rule could be that Alice and Bob both agree only to pull in directions above this diagonal line on the chart:

Some of these directions are good for Alice and bad for Bob, and some are the other way around, but at least they’ll never combine to something that’s bad for both of them. This diagonal line separates the net positive from the net negative outcomes:

So the lesson I draw from this picture is:

Only act in your self-interest if it’s not at greater total expense to others. Because if everyone did, we’d all be worse off.

What do you think? Is the picture helpful? I’d love to hear in the comments if you have thoughts!

3 thoughts on “Tug of Cooperation”