Monday night is chore night at the Biesel household, and that usually means a rush hour trip to the grocery store to pick up the week’s supply of ingredients.

It often happens, as I’m waiting in line at the checkout, that the person behind me is purchasing a smaller load of groceries than I am.

When that happens, I usually let them pass me in line, since it’ll make very little difference to me and save them a lot of time.

But I never feel completely at ease with this decision. Is this a rule I should adopt in general? What happens if I have an exceptionally large load and I keep having to let people pass me, taking ages to reach the checkout myself? It feels unfair to have to keep waiting if I’ve been there a long time and keep being delayed by people who’ve only just arrived.

I also try to take into account the tiny, spread-out effect my actions have on broader society by imagining “What if everybody followed this rule?” In order to avoid catastrophically long wait times, I imagine people would shop more frequently with smaller loads, which ultimately means more of the fixed time costs of grocery shopping—travel to and from the store, navigating the aisles, even the physical act of paying—making this time-saving strategy ultimately self-defeating.

So “always” doesn’t feel like a good answer to the question of when I should let a shopper with a smaller load pass me. To see what makes a better rule, I’ll start by unpacking that feeling of unfairness at letting someone pass me who only just got there when I’ve already been waiting a while.

In that earlier post, I argued that rather than acting in their own interests, people should act in favor of total well-being, in order to avoid prisoner’s dilemma situations where everyone ends up worse off than they started. Letting the light shopper cut in front of me falls into that category, so that rule says I should let them pass.

But the do-what’s-better-for-the-total rule made sense in that scenario as the most general rule that treats everyone symmetrically and keeps everyone out of the bottom-left danger zone. Here, there’s an asymmetry built in: one axis represents how short the shorter wait time is, and the other the longer wait time. Consistently making the shorter waits shorter and the longer times longer will never average out to shorter wait times for everyone, and just seems plain unfair to whoever gets stuck waiting forever.

To me, this isn’t a great metric—surely a metric should at least say it’s bad when everyone’s worse off and good when everyone’s better off?—but it seems to capture what’s wrong with one person continuing to benefit at another’s expense.

Does that mean it’s okay whatever we choose, since either way we can rationalize it with a rule? Not so fast—if we sometimes act in favor of fairness, and other times in favor of efficiency, then the net result can be both unfair and inefficient. 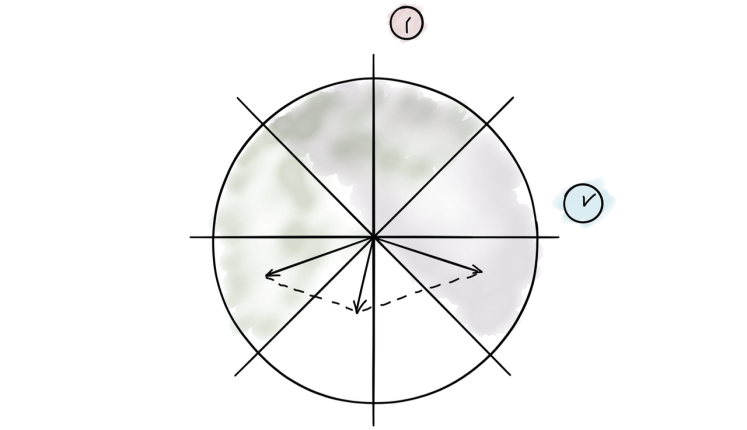 No, we must literally draw a line somewhere and stick to the actions that lie on one side of it—but where should we draw that line? 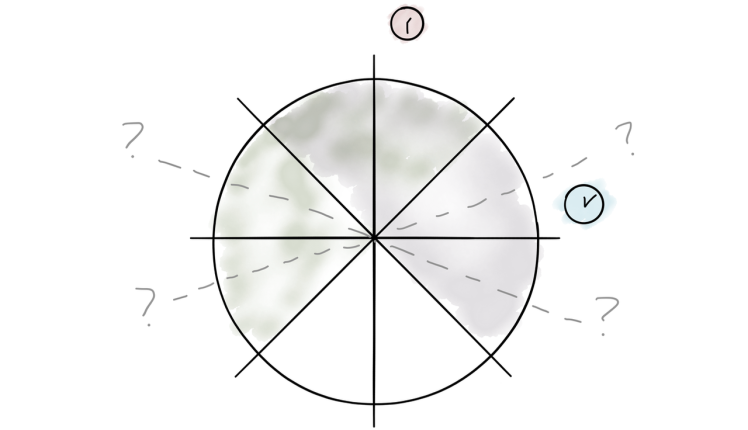 This time we don’t have any symmetry to help us; any line is justifiable as long as I stick to it. But to me the simplest solution is to draw the line horizontally, and measure the goodness of my grocery-store line decision by what it does to the longer wait time.

According to this metric, should I let the light shopper pass me? I should if doing so decreases the maximum amount of time either of us will have to wait in line. That depends not just on how much we’re purchasing, but also on when we each arrive at the checkout lane.  To see how the choice depends on our arrival times, I’ll use diagrams like this one, measuring my progress through the checkout horizontally and the passage of time vertically:

When we add a second shopper, who can only move from “waiting in line” to “checking out” when I’m done, we get to compare the longer (red) and shorter (blue) wait times to how long those wait times would be if we switched places: 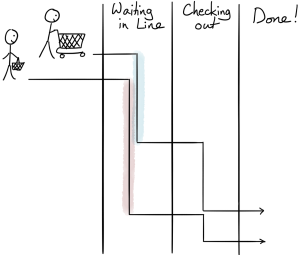 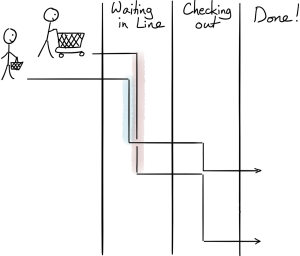 In this scenario, where the light shopper arrived soon after I did, the longer (red) wait time is shorter if we switch, so according to the minimize-the-longest-wait rule I should go ahead and let them pass me. But if they came much later, the longer wait time gets even longer: 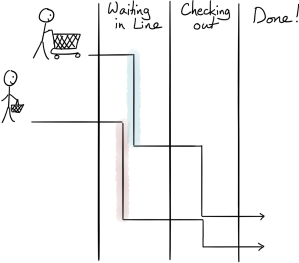 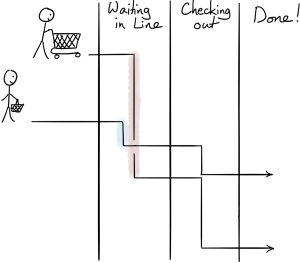 Then if I want to keep long wait times from getting longer, it’s okay for me not to let a late-coming light shopper cut in line. So perhaps my readiness to let someone pass if they arrive right after me, but reluctance to do so when I’ve already been waiting a while, means that this rule is the one that best captures my inner sense of right and wrong.

(I even worked out the exact threshold at which the rule says letting them pass goes from worth it to not worth it: it’s when the difference in our arrival times exceeds the difference in how long it will take us to check out. So if I want to implement this rule precisely, as soon as I get in line I could imagine starting to unload my groceries, and when someone gets in line behind me I could check whether they have more stuff in their cart than I have left to unload in my imagination. Or, you know, I could read my book and not worry about it that hard.)

6 thoughts on “When Morals Collide”