It’s one of the great wonders of our universe that certain chemicals make electricity, and electricity makes magnetism, and magnetism makes things move. One of the classic experiments is to run an electric current through a wire to see the needle on a nearby compass swing around: 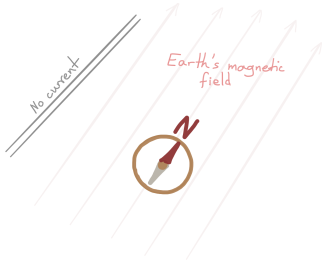 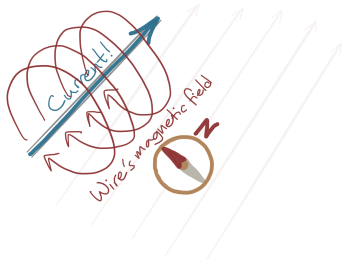 I remember doing this experiment as a child, and after a moment of joy that it had worked, suddenly being appalled that I had somehow created a magnetic field stronger than the Earth’s! Were compasses everywhere swinging around to point to my house? Was I messing with the navigational instruments on airplanes, causing them to drop out of the sky? Was I bursting Earth’s precious magnetic bubble that protects us from dangerous solar wind? (I possessed the unsettling combination of a lot of popular science books and not very much common sense.)

Of course, none of these disasters happened. While the magnetic field I produced was indeed stronger near my compass than the Earth’s was, it was much weaker everywhere else. All magnetic fields get weaker the farther you get from their source, but also the farther away you get, the more constant they become: 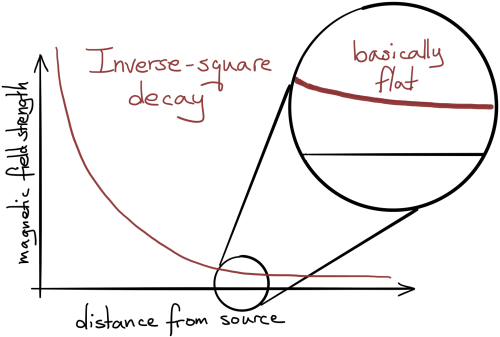 This is because electromagnetism follows a power law, in this case an inverse-square law like gravity. In contrast, something that gets weaker exponentially, like radioactivity over time, keeps getting weaker at the same relative rate forever:

On other other hand, if electromagnetism followed an exponential decay law instead of an inverse square law, my little wire really would be wreaking havoc on anything closer to me than to the center of the Earth:

I felt very relieved when I figured all this out, and didn’t think much about it again. Until I started noticing the same thing happening decades later with my language learning.

Throughout high school and college I took German classes, including acting in a German-language play called Top Dogs whose recording I have not yet had the courage to show anyone but family. I didn’t have much use for my German except to pass my language requirements in grad school, but it did come in handy when Clara and I moved to the Netherlands and started learning Dutch. The two languages are very similar, with almost identical grammar (broadly speaking) and a lot of vocabulary in common, though with some systematic spelling and pronunciation differences.

At first, whenever I tried to speak Dutch, German came out instead. It was as if my brain had only two language buckets, “English” and “Other”, and I had to consciously overwrite the German vocabulary in the “Other” bucket with Dutch vocabulary if I was going to speak Dutch at all. Eventually, the Dutch came easier and easier, until I was surprised on a trip to Aachen (just over the border from the Netherlands into Germany) that when I tried to say something in German, I had to first think how to say it in Dutch and then apply the differences:

So long, German. I suppose my “Other” language is Dutch now.

After three years in the Netherlands, we moved back to the U.S., and while I’ve tried to keep up practicing Dutch and speaking it with other nederlandstaligen when I get the chance, of course I get a lot less practice than when I needed it for daily life. And that’s when I noticed something curious: my German started coming back out! I’ll say es for “it” instead of het. Or welche for “which” instead of welke. I’ll wonder “What’s the Dutch word for ‘bubble’?” and out pops Blase instead of, I don’t know, blosse? (I had to look it up just now. Dutch for “bubble” is bubbel—how could I forget?!)

It’s as if those three intense years of living in the Netherlands were like the magnetic field from a current in a wire: enough to deflect my language compass from “German” to “Dutch” for a while, but now that I’m getting farther away from that experience, my needle is drifting back to the background influence of the six or so years of my life spent learning German.

So what does this mean? It means that the strength of our memories cannot decay exponentially over time, or else ever knowing Dutch better than German would mean my Dutch would keep outweighing my German forever afterward (at least if I never practiced again). Instead, a power law like for electromagnetism would be a better fit.

It turns out that this question—Do memories fade exponentially or according to a power law?—is a semi-controversial topic in learning theory! Cognitive models of memory predict exponential decay, while data more closely fits a power law model, just like I observed. One theory is that while individual memories fade exponentially over time, different memories fade at different rates, and these different exponential decay curves combine to make something more similar to a power law. This is important if you’re designing spaced-repetition software like Anki or Duolingo to help you memorize information, and you can read about Piotr Wozniak’s (the inventor of spaced-repetition software) struggle with this issue here.

4 thoughts on “The magnetism of language”